How to Battle Back-to-Back: Practice Forgiveness

Posted on February 13, 2016 by rebeccabruner

“Be kind to one another, tenderhearted, forgiving each other, just as God in Christ also has forgiven you” (Ephesians 4:32)

Forgiveness. Every child of God knows it’s essential. We all know that, in Christ, we are the recipients of God’s complete forgiveness. We know that He wants us to forgive others, just as He has forgiven us.

So what makes this so tough, especially in marriage?  Many of us never had it modeled. We did not grow up in homes where people asked for and offered forgiveness. The words, “I was wrong. Please forgive me,” never passed anyone’s lips.

But there is more to it than that. To ask for forgiveness requires humility. You must stop making excuses for your own behavior, admit that it was wrong, and ask the other person to pardon you.

And why is it difficult to offer forgiveness when you are the one who has been wronged? Too often, we have this erroneous notion that forgiving someone is the same as saying, “It’s okay,” and we don’t want to excuse our spouse for having wounded us.

But forgiving is not the same as saying “It’s okay.” When you say “I forgive you,” you are not pretending that you were unaffected by your spouse’s behavior. Instead, forgiveness says, “What you did was wrong, and it hurt me, but I’m not going to be the one to make you pay.”

If we fail to forgive, then offenses continue to accumulate. Bitterness grows in the soul like a weed, sending down a thick, strong taproot. Soon, you and your spouse are no longer arguing about what just happened; you are arguing about every unresolved conflict of the last six weeks, or months, or years.

I’m learning that when I have been wronged or my own feelings have been hurt, I need to talk through it with my husband. Through gentle and honest confrontation, I give him the opportunity to repent and seek my forgiveness. Pretending not to be bothered by something that really did wound me is living a lie, and all deception, especially self-deception, works in the enemy’s favor.

When I have been faithful to do this, I’ve often found that until I brought the issue to my husband’s attention, he had no idea he had hurt my feelings. Once I’ve let him know, he’s been quick to ask for my forgiveness. 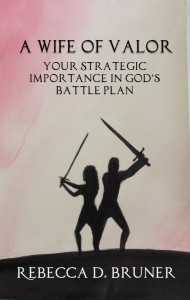 Sometimes forgiveness must be unilateral. God asks us to release all the hurts and wrongs we have suffered to Him, even when the other person remains unrepentant. However, that fact does not justify habitually ignoring conflict, because unresolved conflict does not just go away.  It’s far better to openly address negative feelings than to let them fester and poison your marriage.

Stay tuned for one more practical habit that can empower you to effectively fight back-to-back with your spouse. Adapted from my upcoming book A Wife of Valor: Your Strategic Importance in God’s Battle Plan.